The journey to the NFL is a long one for most players. It’s countless sacrifices, choices, and moments of hard work.

Well tonight it call get’s to be worth it. This is what we play for. 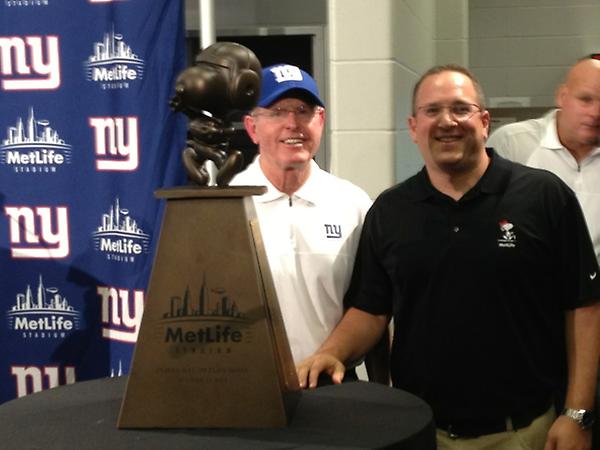 Look at the way Tom Coughlin looks at that trophy. He knows that it’s the pinnacle of hard work and success in the National Football League.

Rex Ryan looks like he loves this trophy more than he ever loved locker room dysfunction (which is a lot).

Ask any NFL player what he dreams of doing as a little kid and the answer will be simple: Win the Metlife Bowl. Hear it from the players themselves.

“When I was doing my free agency tour, I looked deeply into going to the Jets. However, the pressures of playing 2 quarters in the most important game of the season were too much for me to handle so I chose to go to small town Minneapolis.”-Kirk Cousins**

“I wish the Giants traded for me by now so that I can play in tonight’s Metlife Bowl game.”-Khalil Mack**

“While I’ve won 5 Super Bowls and lost two to Eli Manning, and one to a guy who probably won’t be in the league in 5 years, I have no Metlife Bowls. I’d literally play with regularly inflated footballs in every game to just be near that glorious Snoopy trophy”-Tom Brady**

“My favorite part of playing in the Metlife Bowl was when I got to bench Eli Manning after 2 quarters and I didn’t get one ounce of shit from anyone.” -Ben McAdoo

So if that doesn’t convince you of how big this game is then you probably don’t have a pulse.

Personally, I’ve been waiting for this moment since last year’s game. I’ll never forget that game. It occurred sometime last August and both the Giants and Jets played in it. It was definitely a barn burner most likely.

**Denotes that these aren’t real quotes from these people but it’s probably exactly what they’re thinking.