Every year the NFL is blessed with a star that no one saw coming. Phillip Lindsay last season and Kareem Hunt in 2017 are two of the most recent examples. And then every one in a while the NFL is blessed with an unexpected superstar, a king in the making. That man this year: Gardner Fucking Minshew. Minshew is enjoyable to watch, fun off the field, and so weird he somehow makes it cool. The dude already has endorsement offers flying in as well (see below). I fully plan on riding the Gardner Minshew hype until it eventually dies out – and I expect it to be a ton of fun. 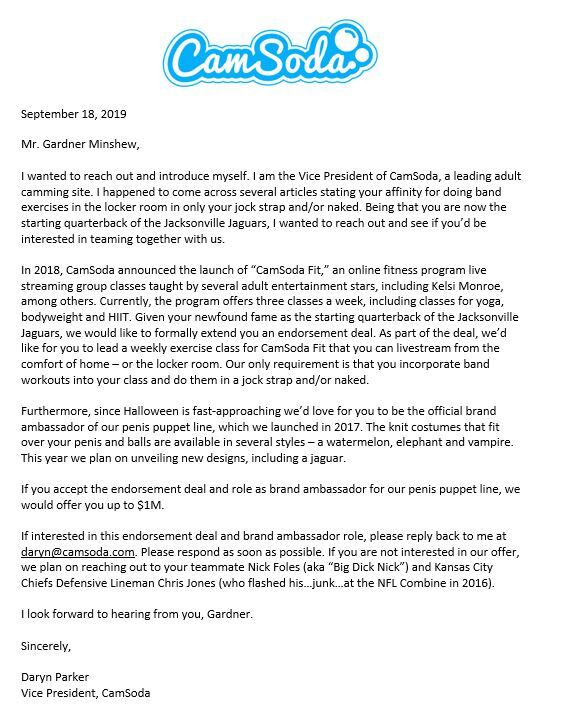 Happy Hump Day and welcome back to the PFF Efficiency, Numbers, Info, and Stats (better known as the PENIS). Hopefully the thought of Gardner Minshew with his jock strap and aviators on while dancing in the locker room has prepared you to take on the PENIS with me this week.

We’re doing things a little bit differently than week 1. We’re gonna play a game of guess who (hint, you already know who), Look Back At It 🍑 with some Week 2 facts and tidbits, I’ll lube you up with some PENIS Prep for Week 3, and then we’ll wrap it up with some accolades for Week 2.

Let’s start this week’s PENIS off with a little game. I’m gonna give you some QBs based off of stats and you need to guess who they are.

One of these QBs was a late round selection and the other two were first rounders. The two first round QBs are widely believed to be two future elite QBs. Two of these guys are throwing to some of the best WRs in football while the other’s top three WRs have about half of the career yards, receptions, TDs, etc of the other two receivers combined. So, guess who?

I don’t think Minshew is being talked about enough through his first two games. Has he been stellar? No. But for a young QB getting thrown into the fire because of an injury, he’s been fantastic.

Since Cincinnati drafted John Ross 9th overall in 2017, Bengals’ fans have tried to convince themselves that Ross has what it takes to be an elite receiver. I’m here to remind everyone that Ross still can’t catch the damn football. I’ll periodically bring back the John Ross Drop Tracker every week it seems necessary.

Sam Darnold’s inability to keep his lips to himself has managed to totally ruin the Jets season. What 22 year old man catches mono? Grow up and get yourself a real man’s disease like chlamydia or herpes.

Also, do your entire franchise a favor and kiss Adam Gase directly on the lips.

A straight, white, male just feels right when it comes to handing out the slot shamer of the week. Kupp put on a show in Los Angeles with 5 catches and 120 yards out of the slot this week.

“I want to fucking win. Excuse my language but shit, everybody knows that.”

RUNNING BACK OF THE WEEK: Lamar Jackson, BAL

Ravens RB Lamar Jackson ran for 120 yard on 16 attempts this week to help the Ravens get to 2-0. Jackson is now averaging 6.6 yards per carry and has out gained the likes of David Johnson, Chris Carson, and Leonard Fourtnette this year.

DICK OF THE WEEK: Archie and Olivia Manning

This is 1000% premeditated Dick of the Week award. With Daniel Jones taking over the starting spot from Eli Manning, we all know something awful is about to happen to him. There’s a track record of bad things happening to those who challenge the Mannings.

The Chargers took Eli even though he didn’t wanna play in San Diego and the Mannings cursed the franchise with well known choker Philip Rivers. They ran McAdoo and Reese out of town when the two were ready to move on from Eli. Look at what happened to Kyle Lauletta last year when the Giants were struggling. He was hit with a speeding ticket, charged with eluding the police, and shamed by the entire fanbase.

Something awful is about to happen to Daniel Jones and Eli Manning will end up the Giants QB for the next 20 years.

If you made it this far, thanks for taking on the PENIS with me. See ya next hump day!